After weeks of preparation regarding our fishing experience in Valencia, we finally landed in Valencia's airport, anxiously waiting to see our fishing gear safe without damages.

We quickly found a taxi, and in fifteen minutes we  arrived in Apartamentos Peurto Valencia. A luxurious flat, which was quiet above our expectations.

It was quickly realized that language was going  to be a problem that may hinder our communication, both with the locals and the fishing competition organizers.

After some minutes walking, we found our first fishing shop. It had all kind of fishing equipment, yet with limited staff regarding float fishing. We saw for the first times, reels which are like fly fishing reels which are used exclusively for bolognese fishing along with a 10 metre rod. 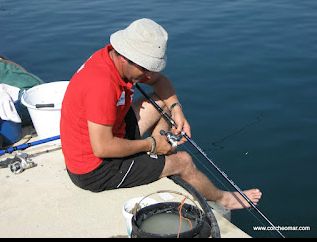 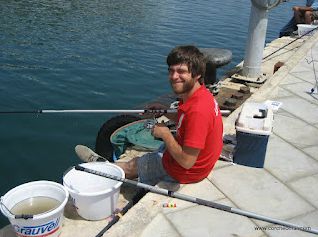 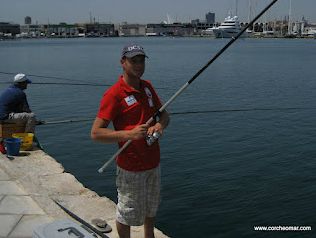 As we tried to gain some fishing tips that work in Valencia, we only took minimum information as once again we were burdened by the language.

While we were going back to our apartment, we decided to take a look at Valencia's harbour. As soon as arrived by the sea, we eagerly looked in the sea, seeing loads of mullets and sea bream.

Our heart was filled with hope, seeing a large number of fish as compared to Malta. We could not resist not fishing and quickly threw some fishing lines, but with not much success as a policemen came shouting that we could not fish in the marina.

At least we were not given a fine!

As the sun shined brightly on Friday morning, so did we, as this was the training day where we could try our fishing techniques.

No pegs were drawn for the training session. I started throwing grounbait and qucikly worked, as James Micallef hooked a nice sized mullet in the first throw.

The Spanish guys were impressed and quickly surronded us to see our fishing methods.

Yet it was the only nice fish landed with some few bream caught with the running float method.

I must admit that a faint hearted feeling set in, especially with me (Stefan) and James. We did not even prepare fishing rigs for the proper competition. On the other hand Nelson kept his belief and continued to prepare for the match.

The day of truth finally came finally arrived. Stefan and James were drawn in peg 4 and 5 while Nelson was drawn in peg 18.

The fishing equipment was very well equiped with all sorts of bolognese rods, Valencian traditional rods and quiver tip rods used to fish beneath the jetty.

The first fishing competition started at 10. Some Spanish guys were catching bream with a running floats and the local worms (la panal) which seem to be the best bait for bream.

James Micallef caught a nice sized xilpa with farka in the first cast. While fishing for mullet, Stefan caught a horse mackerel and quickly changed bait to shrimps which proved positive. Stefan changed his technique by fishing with a six metre pole and was catching a fish a cast. Infact Stefan placed 3rd in the sector composed of 14 competitors, and 8th overall. I must admit that I started to belief in myself.

James and Nelson were in the middle table after the first competition. We had our team talk and we knew that the tournament was still wide open. We were alloted different pegs and quickly moved our fishing staff to our respective pegs.

The second competition proved difficult to everyone, with few competitors weighing their catch. Stefan only needed a single fish to clinch one of the first tenth places, but failed to catch a single fish. On the other hand James also had a dry net, while Nelson caught some few fish.

I must admit that I was more optimistic about the quantity of fish. Yet it was one of my most memorable experience in my fishing history and which surely wouldn't be the last international competition. Thanks would also go to my friends James Micallef and Adrian Nelson.

For more information and full results check out www.corcheomar.com

01/09/2019 13:00
Today dawned a cloudy morning, which set the stage for Match 2 of the Singles Finals League that had to declare this year’s singles league champion. And pride of place this year went to Fortune Calafato, who also managed to win both Final Matches in the process, runner up was Maverick...

25/08/2019 13:30
This morning the 10 finalists of the Singles Johnston league battled it out at Sliema Ferries, unfortunately the match had to be stopped prematurely due to unforeseen circumstances and for fairness sake, but it still counts since more then half the match had gone by. 1st Overall today went to...