Following the first place obtained in the KSFA Annual Tournament when teaming up with Franklin Formosa and the first podium in last Singles Match 3, Darren Stafrace managed to confirm his form by clinching his first victory in a KSFA Singles Match.

Determination was shown by the latter throughout the whole match and it was not a surprise when the scales read 2.35 kilos.

This catch was a mix of bottom fish, one of which a parrot fish that marked 370 grams, enough to be the biggest fish so far during this league.

Evergreen Saviour Borg managed second place, an excellent result considering that Manouel Island was never one of his favourite venues.

From his first cast he showed that he was on track by hooking a good number of parrot fish on his short distance pater noster. Infact he landed 2.160 kilos as said, mainly parrot fish.

Third place was fought till the very last cast between the introducer of competitive fishing in Malta Steve Johnston and Adrian Nelson.

Finally the spot was taken by one of the most versatile anglers on the island, Nelson who managed to top Steve with only 20 grams difference, leaving Johnston’s 1.8 kilos catch, earning him a section win.

The two other section winners were Andre Borg and John Attard.

After this match the table can confirm that this year, once again the league is so tight that one must surely wait for the last two matches to confirm the first three placing.

It is going to be interesting to see who is going to adopt the right strategy, as more than half of the participants are in the race to obtain a place on the podium.

Will it be the veteran’s experience or the energy of the younger anglers to prevail? Who knows?  Time will surely tell. 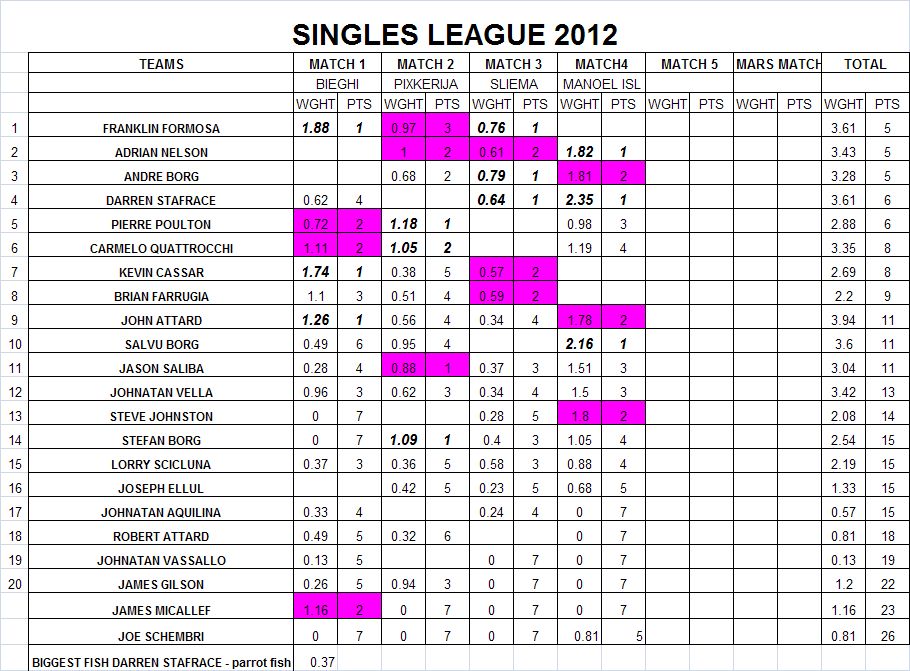