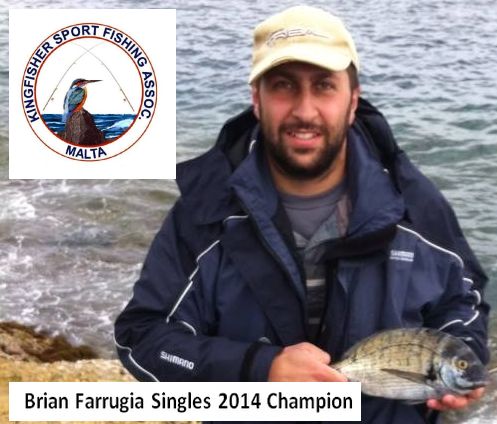 Todays match was much awaited as this was the last match of the season in which the singles league had to be decided.

The venue was Open sea at Xghajra and contrary to the other open sea venues which had to be changed todays was perfectly fishable.

The match started on schedule at 0700 but at 0800 a decision was taken to stop the match for a while till a thunderstorm in the area had passed as since all the anglers were fishing with carbon rods, this could have created a very dangerous situation, carbon being very coductive to electricity.

Fortune Calafato started this match affording up to 3 penelty points to win the singles league, but luck was not on his side today as he ended up forfeiting 4 penalty points, to the 1 of Brian Farrugia, who had a great day, which started of by him catching the leagues biggest fish a Mghoza of 780g and ended up by him placing 3rd on the day and winning the big prize, the 2014 Singles league.

Thus Fortune slipped to 2nd place and Sandro Zammit 3rd. Congrats to all the winners.

Now a little about todays' match, which was not a bad match at all, but the man of the day was Pierre Poulton who managed to lure the small mullet (bobin) to his peg and being the bobin expert that he is weighed in a hefty 2.92kgs, he was followed by Sandro Zammit with 2.36kgs mostly parrot fish and Brian Farrugia who besides landing the biggest fish also managed a decent amount of bottom fish weighing in 2.09kgs.

Next match doubles league match one on the 1st May.

How was the singles league

not up to expectations (41)