The Kingfisher sport fishing club members this Sunday morning battled the scorching heat and the crystal clear sea along the Valletta Pixkerija quay.

Many of the anglers caught small wrasse and the occasional parrot fish, using light ledgering.

Carmelo Quatrocchi opted to feed and speed fish for Bogue “vopi”, while Pierre Poulton and Stefan Borg continued to catch bottom fish on a regular basis, both having a mixture of wrasses, breams and parrot fish.
James Gilson was the first to hook a decent fish which from the bend in his rod one could tell it was going to be the best of the day, however the hook pulled out and the fish got away to the total disappointment of James and those watching.

The same happened to Stefan Borg towards the end of the match hooking a nice mullet on the polaris system, only to lose the fish on a snag. Some other anglers also had a few good sized fish get away.
The sections were well balanced, although gone are the days when anglers could say that their section was an easy one, for most, if not all KSFA members have become somewhat experts at their sport.


Those watching had their eyes on Franklin Formosa and Adrian Nelson, two of the clubs top anglers; however it was not going to be their day as both had a quiet match, even though they were not far from the first 3 placing members.


The four hours swept by quickly and the marshals prepared the scales to weigh the fish, Sandra Darmanin from the University of Malta was also present, to continue with her studies of bream (sparli) during the weigh-in. It is interesting to add that once Sandra’s results are published members would have statistics that will surely help with their performance.


All fish were returned back alive, except for the few that died, these were taken for studies.
The low results on the day all the more proved the difficulty the members had to face.

The next event is the well awaited doubles 3 day KSFA tournament, the registration for this match will be held on Wednesday 26th September at 7pm at Pieta FC.

Jason Saliba snatching a good section win on the day 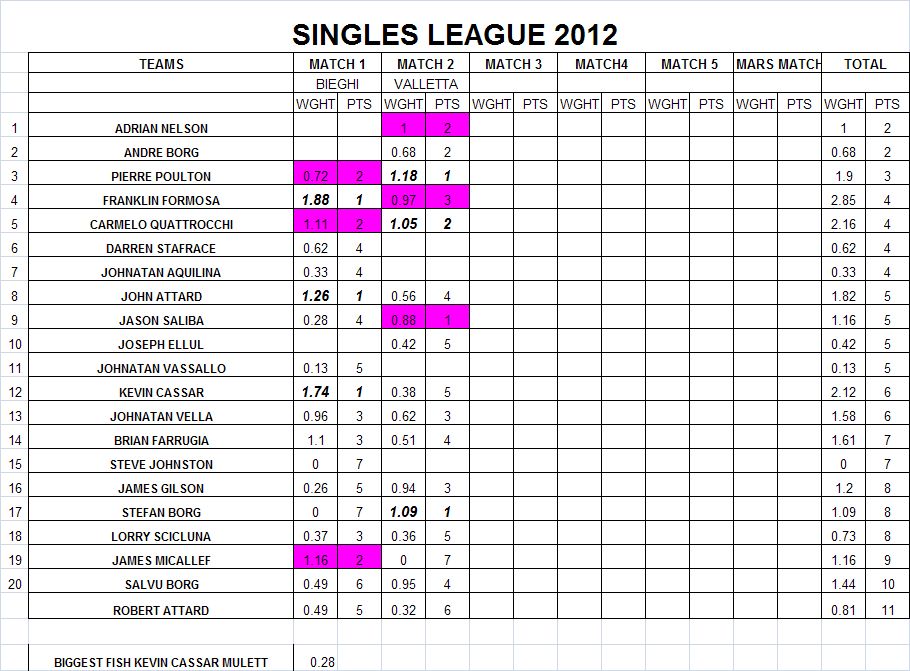