The Amateur Fishing Federation of Malta this year is organising a Big Game Fishing Tournament open to all recreational fishing boat owners.

The main aim of this Tournament is to collect funds in aid of St Peter Foundation, a local charitable organisation. St. Peter Foundation  was founded by Notary Tonio Spiteri with the help of other benefactors   in 2004, and its activity is the buying of fish at  a low price, processing of same fish into fish portions and  distribution of  these fish  portions to Institutions, such  as to Old age Homes, orphanages and similar local institutions   with social needs.  At the moment thirty such institutions are benefiting from this free service every month. The demand is on the increase, and the Foundation is trying to build a premesis where to store and process the fish portions.   This project needs financial funds, and the Federation, through this event, is trying to help.

The event consists of three phases namely a Pre Tournament briefing, the Fishing competition and the Award Ceremony.

During the briefing, which is compulsory for all participants , the Tournament Director will explain the logistics and the regulations governing the Tournament.

The Fishing Competition will be held on Sunday the 8th of July 2012. If weather condition are not favourable, then  the competition will be postponed to subsequent Sundays.  Starting points for the competition are Birzebbuga Port (St Georges pier) and Gnejna.  Following vetting of boats by Tournament inspectors, the boats  in groups according to their maximum speed will start leaving  the port, escorted by a support boat at 05:30 am. Once out off Benghajsa point, the start of the competition is on.

All participants must be back by 3:00 pm. otherwise they will be disqualified. All catches will be counted and weighed by Tournament Judges helped by the inspectors. Winners are ranked according to the number of fish caught. In the case of an equal number of fish being caught by two or more participants, then the weight of the catch is taken in consideration. There will be also a reward for the largest Alonga and biggest other fish .

The final phase is the award ceremony where following a short introduction by the Committee Executive members of the Tournament , the winners will receive their rewards.   A reception will close the event. 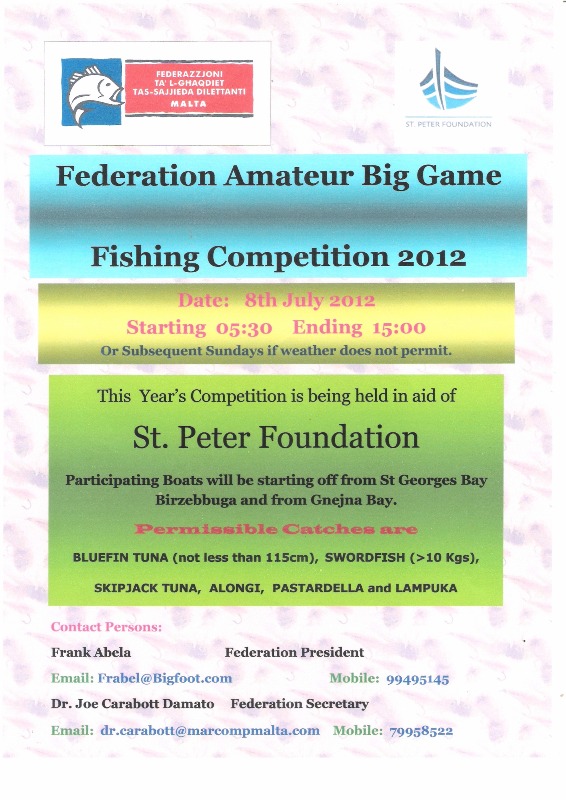