Franklin and Darren managed to get the best, winning this year’s edition. They caught an impressive catch of 11.09kg in just 12 hours of fishing.
The tournament started on Friday evening at Birgu Toqba with all participants eagerly waiting that big fish that may bite during the late sunset hours.

Only sound being heard at the time were the rods casted far out and grounbait splashing against the water.

It was quickly noticed that bottom fishing was not at its best.

The first decent fish was caught by Stefan Borg, when landing a nice sized Salpa in his first cast with farka.

In a sudden mullets were flowing, with James Micallef and Stefan Borg managed to keep the shoal of mullets on the peg, catching a good amount of mullet in few minutes. On the other hand the neighbouring peg of Franklin’s team also caught mullet, with some bigger specimen than Stefan’s team.
During the night hours, bites were slow, with some 4 mullets being landed between the two teams.
Meanwhile Salvu Borg landed the biggest mullet on the night, with a nice 730 grams landed on a fine Bolognese set up.

Also S.Borg managed the biggest fish of all tournament.

The first day ended up with Borg and Micallef having the 1 point, Formosa and Stafrace earning the 2 points.
Second competition was held in Manoel Island.

All eyes were on Borg and Formosa teams knowing that if they earn the 1 and 2 points, they would surely be in a favourable position to place in the tournament.

The match started at 11 am with a strong South Easterly wind making it difficult to fish with light ledgering.

Thus lead weights had to be increased so as bites could be more notable.


A nice variety of bottom fish was caught, with bream, wrasses and parrotfish being the catch of the day. Borg and Micallef earned the 1 point with a good weight of 3.66kilos, following them were Brian Farrugia and Emy Grach with a weight of 2.88 kilos. The 1 point earned by the former meant that only 5 points were needed in the next match to cement their position in the top overall place.
Sunday’s match was held in Senglea waterfront, a much anticipated match part of the BOB Boatshow 2012 events, every competitor knowing about the quantity of fish caught in previous competitions.

Yet Stafrace’s and Calafato’s team continued to catch mullet till the last moment.
Salvu Borg and Calafato were the best of the day catching over 5 kilos of mullet, assuring their ability by catching over 12 nice sized mullets.
Second on the day were Stafrace and Formosa with over 4 kilos of mullet.
Meanwhile third were new comers Jason Saliba and Miguel Caruana with a very good catch of bream and also a nice gilt head bream.

Against all odds Micallef and Formosa had a miserable match, only managing to take 8 points that summed up their previous 2 points with a total of 10 points.

As the tournament was based on a point system Formosa and Stafrace got the least points with 8 points.
Second place were Salvu Borg and Darren Stafrace  with 9 points.
Third overall placed James Micallef and Stefan Borg came third with 10 points.
Most important was the sportiness and handshakes between all members after the final weigh in.
Many thanks goes to chief marshall Alex Genevose and Pierre Poulton who had a very important role in the coordination of all matches. 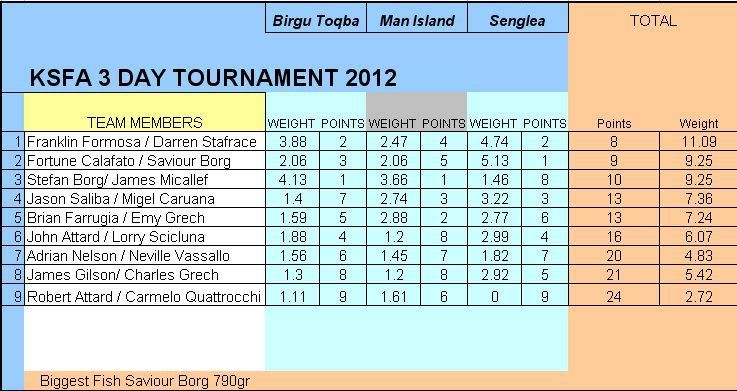