I have been fishing since I was a kid. I have always lived in my
hometown of Birzebbugia and I remember Mxlokk bay as being a
completely open bay with no restrictions at all.

probably one of the richest not of Malta but even of the Mediterranean
40+ years ago when I started fishing. I recall nobody in my family
which was keen on fishing so probably I had the urge from living so
close to the sea. In those days we fished mainly with bread and live shrimps which
we caught with small nets.
The bay was so rich with live bait you could catch enough shrimps for
a days fishing by visiting a handful of rock pools. I still
remember the exact spots which nowadays are either filled with rubble or with sand.
One fishing adventure I so vividly remember is when a summer resident
which had been actually watching me came to my mums house asking if
he could take me with him fishing. He was from Zabbar and later I
discovered he caught ckal as a part time. I remember him coming
for me and we left for Xaghra with his Morris Marina. All I took was
some basic tackle and a short fibreglass rod and reel which my dad had
bought me probably from the shop in Valletta. I had never fished with
ckal so Leli showed me how to put them on the hooks and where to
cast exactly. The lead weight had barely hit the bottom and the rod
was almost taken out of my hands. With every cast I was catching two
large bream.  It was a day I will never forget.  I went home with a large bucket
of sargi. 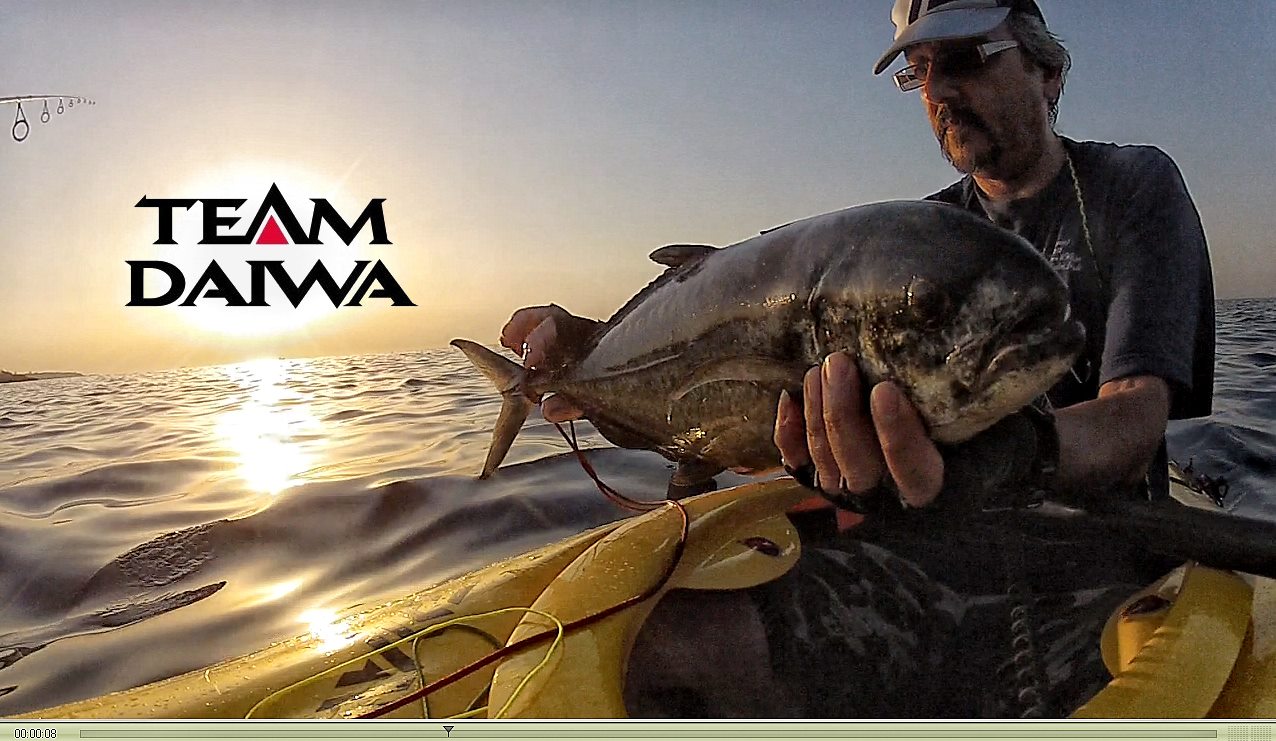 Yes I was a KSFA member since the beginning and won many a competition
in the old days. Competition was harsh and every member studied new
techniques and practiced to be a winner. We were like a large team as
even though the competition between us was so vivid we were all great
friends and shared ideas. I believe it is still the same nowadays and
that is how it should be after all.
I remember winning the Doubles Marathon at Gzira together with Joe Tanti.
That was one of many but one I remember well.
I stopped competing due to change in work and actually I even stopped
fishing for a few years.  Then something happened which changed my
life and brought me back to the sea. I was not feeling so good health
wise and this was due to excessive smoking. The doctors thought it was
asthma but I knew it was all due to smoking. I made a big decision as
I had to stop but I needed a reason. In my mind i had to create a
reason to stop. Those people who smoke know this reasoning.  Ex
smokers did not stop just because it was un healthy. Most of them
created another reason to back the health issue. I decided I would buy
a kayak and start kayaking as soon as I stopped and that I did. In a week I had
almost regained my breath back.
In a month I was paddling on alternate days for an hour. Nowadays I
paddle for 4 hours non stop. I hope this will be of encouragement to
others. The fishing / kayaking developed at a later date and now I
never kayak without a rod and reel. 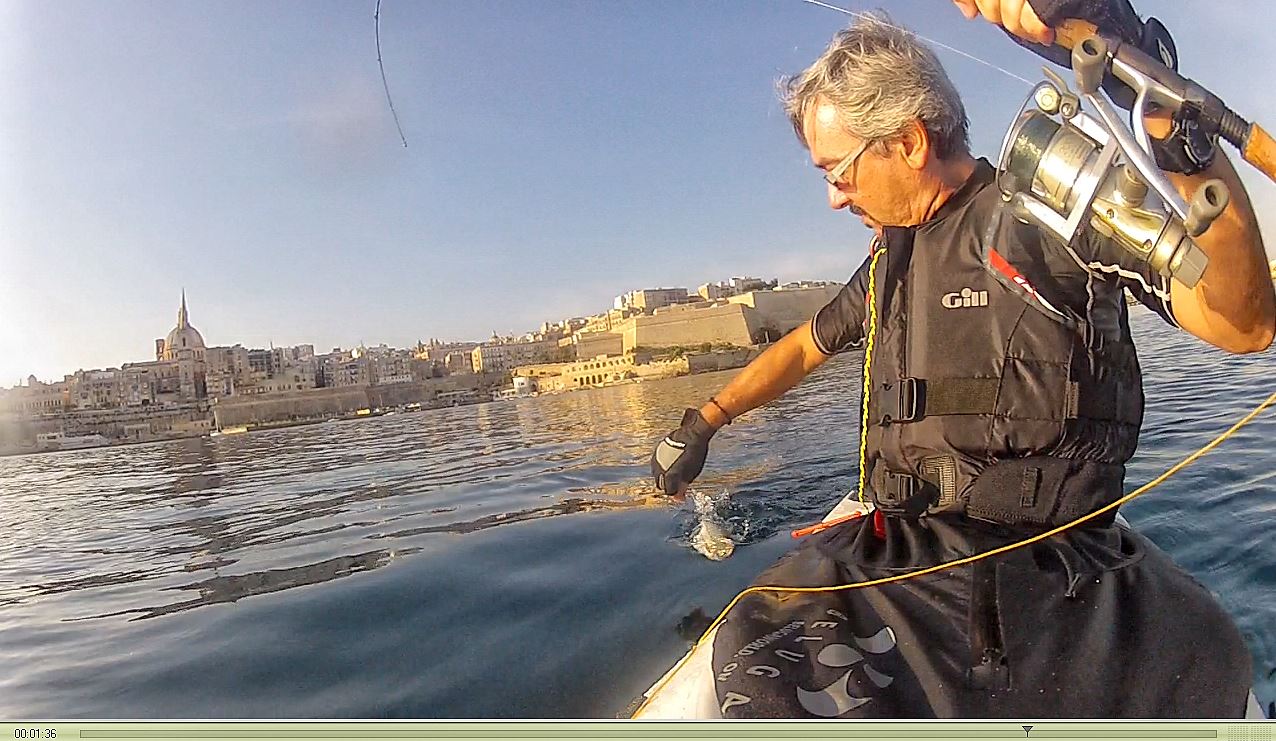 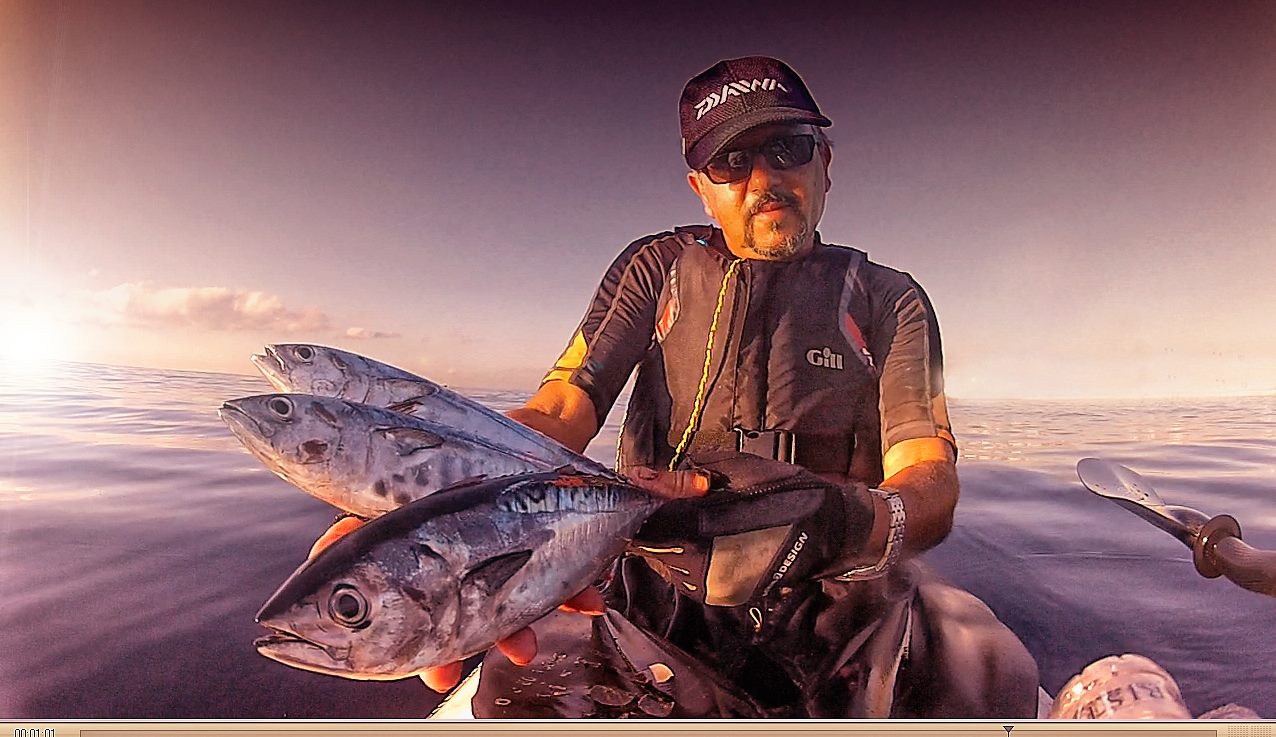 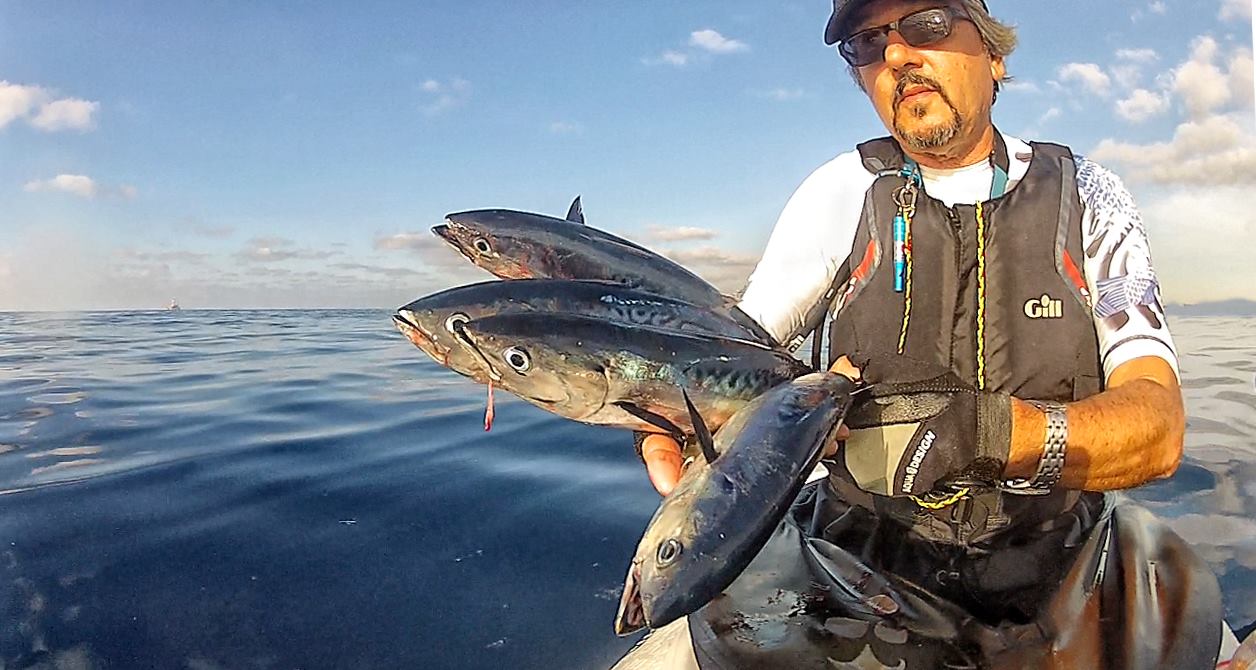 Kayaking / fishing is something out of this world. I never imagined I
would discover such beauty around the maltese islands. I did have a
boat which I used regularly but the bays and caves you discover with a
kayak is unbelievable. I love trolling for saddled bream and it
probably is a big advantage being so silent with a kayak. It is like
tip toeing on the water for me when I am looking for the bream. I have
had great fun every year and many a kayaker has started fishing also
after seeing my photos and videos.

My biggest catches have been while fishing for saddled bream. We all
know how crafty these fish are and I use very thin terminal tackle.
Yet I have managed to catch much larger fish on the same tackle mainly
Blue Runners, some exceeding well over the 3 kilo mark. I have lost a
few fish which could have been even larger but ....... its always
the one that got away! My dream is to troll for albacore on light /
medium tackle with the kayak. I have never found the exact opportunity
to achieve this. I need the perfect weather to go out that far and
fight the big one which could take me so long to retrieve on a kayak
and then have the strength to kayak back.

I do go fishing from the shore mainly spinning but my eyes tend to
venture everytime to the horizon and so I try to kayak every time I
have free time.  Maybe its the feeling of being free and unhindered.

I believe sport fishing in Malta is having a hard time. As I said
above the sea was unbelievably rich when I was a young kid but
nowadays to catch a decent fish you have to either be lucky or you
have to definitely improvise to be wiser then the wisest fish that has
managed to escape all the nets, long lines, traps and scuba divers
that have increased to an uncontrollable manner. The only way us sport
fishermen can help is by practising the catch and release system which
KFSA and most if not all fishing clubs so well promote.  It is
probably our biggest dream if someday all irregularities in fishing are controlled.

I do believe I was one of the pioneers in kayak fishing here in Malta
and have promoted this by sharing techniques to all those interested
in starting this sport. I myself have conjoined two sport activities
as I use contemporary kayaks and not fishing kayaks. It helps in a
ways as I use faster and lighter kayaks which you can paddle for hours
unlike the heavier ones used solely for fishing and / or short
distances. This in a way has hindered me from trying my luck abroad
although it is in my bucket list to join my friend Robbie Wong Yuen
some day and catch myself a marlin or a yellowfin tuna.

I personally think that KSFA has been of great help to many a teen
with all the activities and friendships bonding fishing and friends
together. I truly congratulate all the committee members who organized
so many activities through the years. I would also like to
congratulate all those members who competed on foreign shores and
achieved such great honours to such a tiny island. 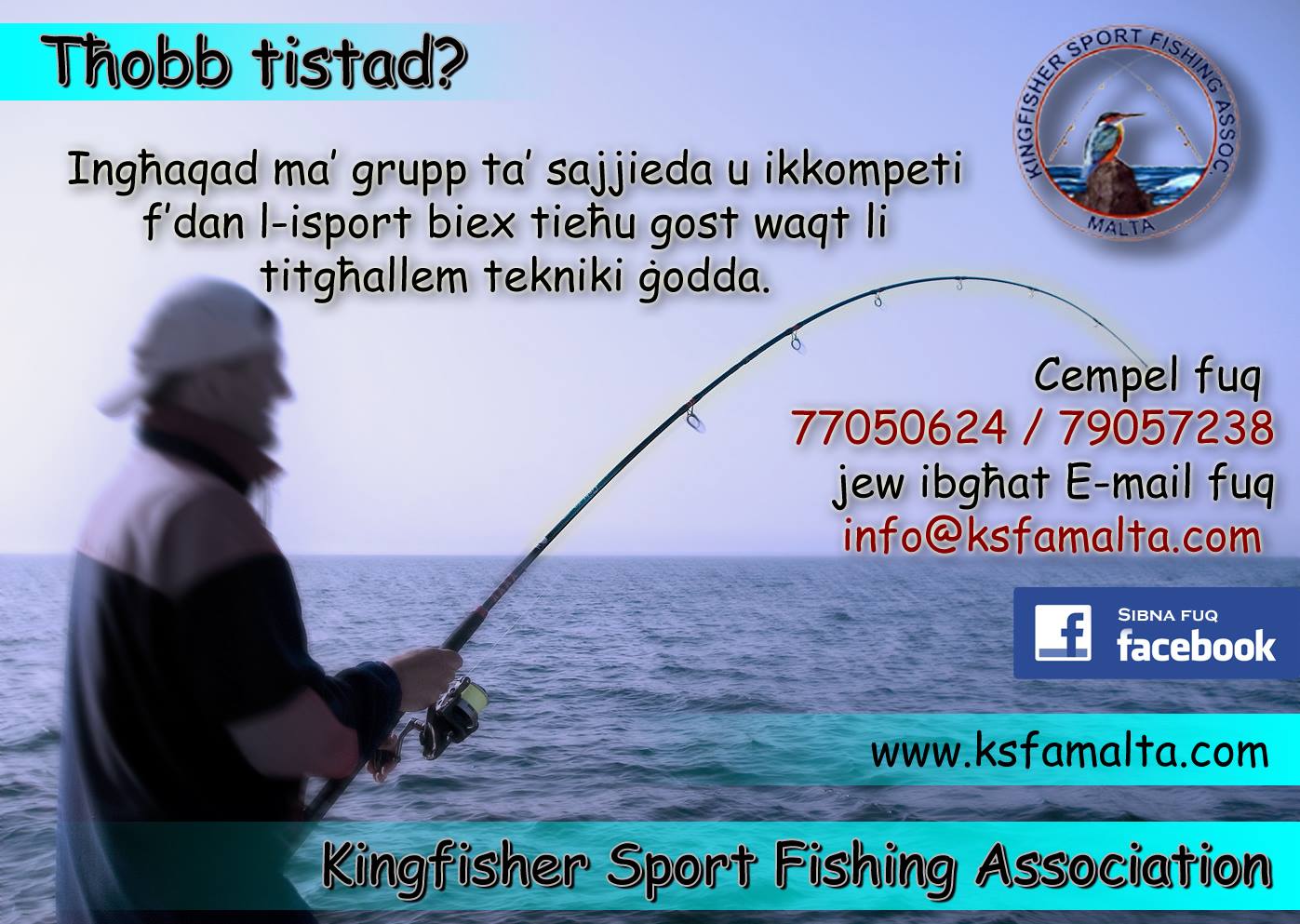