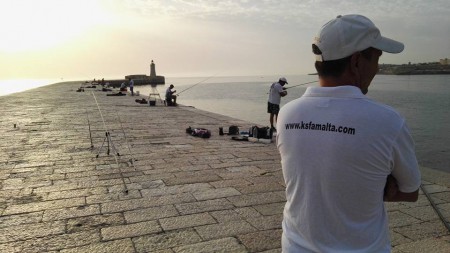 On the 6th August, the top 10 competitors from this years KSFA Johnston Singles League 2017 met quite early at 05:00 next to the Valletta Breakwater to compete the first of two matches for the finals.

As one has imagined since this venue was never fished before and there is a quay height of 3.7m most members where talking with each other discussing how they are going to use the keepnet and solve the main issue, who one is going to net the fish. Drawing of pegs was done and all competitors started preparing their rods.

As soon as the competition started most people started fishing using paternoster rigs for bottom fish. Several types of fish were being caught mainly wrasses, breams and parrot fish.

After weighing Andre Borg won the match by netting 5.100Kgs, in second place Aaron Xuereb had 4.260Kgs and in third place Sandro Cohen came over with 1.930kgs. Winners were presented with trophies and vouchers. We wish to thank Main Sponsors for this league being Mister Fish Malta & Quality Used Cars Msida.

The Second and concluding final match of the Johnston Singels League shall be on the 8th Sepetember.