The KSFA 2011 3 day tournament was again another huge success by the club. 7 teams participated in this event, all with great enthusiasm and eagerness to win. This was showing from weeks prior the tournament as the teams were building up and preparing their tactics.

Amongst the participants this year was a team from Blue Sea Angling Club and also another team from outside the club. After big preparations the weekend of the tournament arrived. On Friday 21st it was the much awaited Waterfront Viset terminal night fishing match which was carried out between 8.00pm and 12.00am. For this particular match there were huge expectations as the sea passenger terminal was never fished before at night. Fortune Calafato and his team made up of Charlo Saliba, Darren Stafrace and Jason Saliba registered a good weight of 4.100kgs total of fish including a nice 900gms specimen mullet. The team from Blue Sea Angling Club also did some spectacular fishing as they registered 4.010kgs with a good mix of nice sized breams.

Saturday’s venue was Manoel Island from 11.00am till 3.00pm. The match turned out to be very difficult since it was raining from start to finish. Lorry Scicluna’s team made up of Charles Grech, Joseph Ellul and James Micallef did some good catches of parrot fish as they registered a 4.230kg of fish. Second on the day were Franklin Formosa’s team made up of Clayton Camilleri, Mario Marlow and James Gilson with 2.86kgs of fish mostly damsel fish and breams. Steve Johnston’s team was also catching up as they registered 3.960kgs.

The final day was planned to be fished in Bighi but due to some lack of space for all pegs to be set up the match was shifted to Birgu Toqba. The final match saw Stefan Borg loosing some good sized fish. Both John Attard and Steve Johnston also lost nice sized fish while fishing with Bolognese rods. Charles Grech also lost a nice size mullet in the last minutes of the match. The top three teams all fished with great speed mostly setting up for speed fishing. Some breams were also being caught on running ledgers and other bottom sea fishing set ups. The match started at 7.15am and ended at 11.15am and immediately weights were being taken after the match. There was big excitement since at the stage three teams were so close to each other in final weights and everything was possible since the tournament was being fished on weights and not on points. Franklin’s team turned out to be the winners on the day with a good 5.080kgs. Steve Johnston’s team made up of John Attard, Stefan Borg and Adrian Nelson came second with 4.770kgs of fish.

A total of  nearly 63kgs of fish were caught and releasd back to their natural habitat during this year’s 3 day tournament which turned out to be one of the greatest ever with 7 different teams competing for the cups. The presentation of trophies was done in an after match pasta at Lemon and Lime Bar in Marsascala.

There were mixed feelings of satistafaction and disappointment on the angler's faces at the end. All the anglers looked tired after a 3 day competitive fishing experience, but chats of the fish that run away and friendship amongst the competitiors was a the big joy of making me being part of the Kingfisher Sport Fishing Association.

Special thanks go to Alex Genovese, Brian Farrugia and Robbie Attard for marshalling all the matches. Also a big thanks to Waterfront Viset Group, and Midi PLC for permission to fish the Valletta sea passenger terminal and Manoel Island restricted beach respectively. This year’s KSFA 3 day tournament was again sponsored by Mister Fish by presenting 50% of the expenses on the winning vouchers. 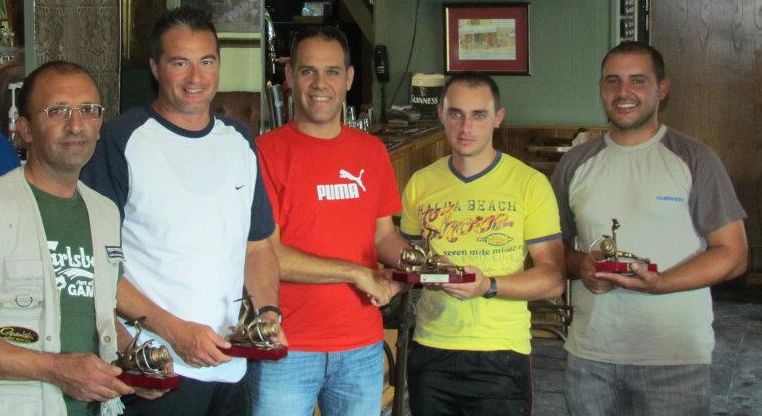 The KSFA 2011 3 day tournament in photos