The match day for the mid-season singles match was characterized by a strong breeze and gusty waters. “Perfect weather for a fishing session”. However this proved to be the opposite.

The anglers struggled to hook their first fish of the day. Adrian Nelson and Andre Borg started some bogue fishing which was also scarce compared to other days. It was immediately noted that the day would prove to be a difficult one.

Franklin Formosa patiently fished close to the shore to look for some bottom fish. He managed to gradually hook some small wrasses, parrotfish and occasional bogues.

Darren Stafrace, the surprise for the day, caught some well sized bottom fish with the running ledger.

Lawrence Scicluna stuck to pole fishing which proved to be slow but successful for the day.

Adrain Nelson swapped to mullet fishing but although the water conditions were perfect, he had no success.

Most anglers did not manage to exceed the 0.6 kg mark in total with the exception of Andre Borg who managed to win with 0.79Kg, Franklin Formaosa who placed second with 0.76 Kg,  Darren Stafrace placing third with 0.64 Kg and Adrian Nelson with 0.61Kg winning the section together with Brian Farrugia and Kevin Cassar.

All the fish were kept alive and released back to their habitat.

The singles league is thus proving to be a tough fight as most anglers are still challenging to rank in the top three positions.

Match report by   ………. Pierre Poulton  (chief marshal for the day) 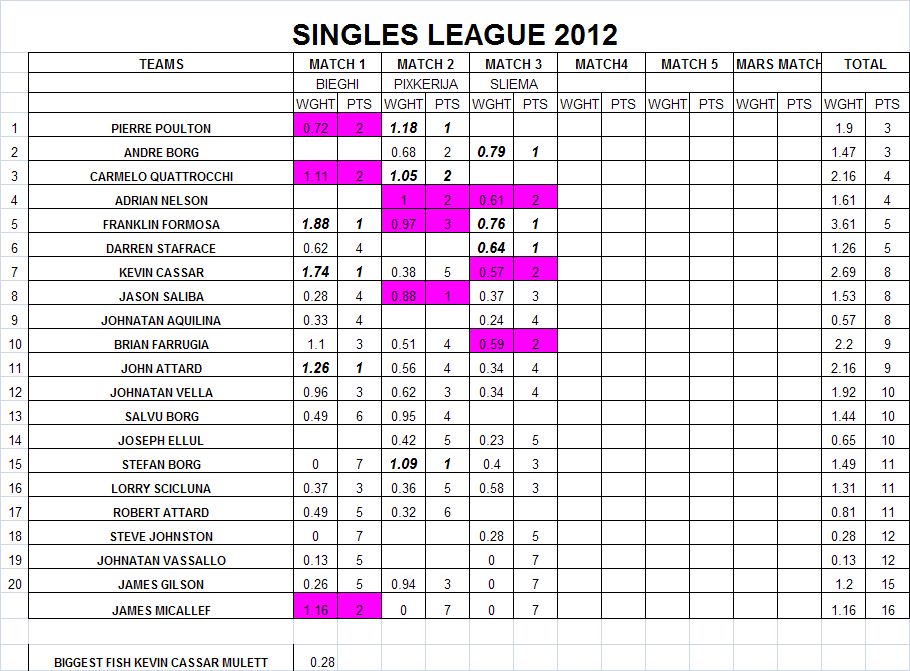